I have been working on a gift neck knife combo for my son in law’s birthday. He does not have any real field knives for camping, hunting or bushcrafting so I thought that a solid neck knife would be the best way to get him started.

When choosing a good field knife, I like to look at how harsh someone is going to be on the blade. My son in law doesn’t do a lot of woodcarving, but wants to get more into hunting. Getting him something that was lighter on the bushcraft and heavier on the camp type chores seemed like a good target. The blank I chose was a MP Classic built by Matt Paul in New York. We have several of his builds and have been very happy with them. Getting a solid blank from Matt was a no brainer since I wanted something to eventually become an heirloom. Because this was going to be my first “outdoor gear” gift for him it was very important that I do a lot of the work to get it built and ready. It might not have been important to him, but I wanted him to know that I was willing to spend a lot of time and energy in creating something that will last his whole lifetime.

When I went shopping for scales I looked for something different, but went with the classic lines of the blank. There was no real shape to the handle so something simple and elegant seemed like the right choice. I chose some paduk that had some phenomenal color and grain. For pins I used some brass stock.

Fitting the handle on a straight lined knife handle is not nearly as easy as one would think. There are no curves or shapes that you can use to hide small imperfections. Everything has to be completely straight and smooth to feel right. 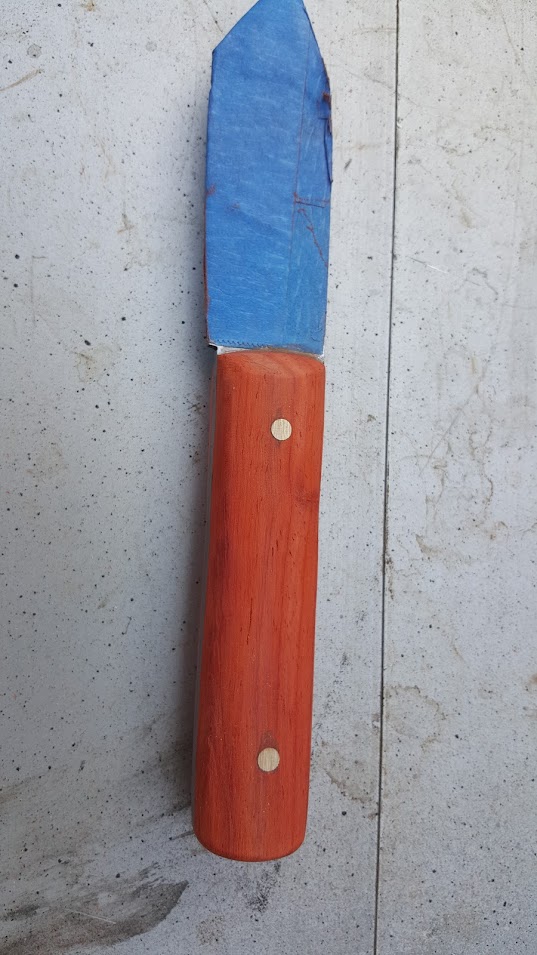 To finish the handle I melted in some carnuba wax and polished it. For some reason the pudak soaked the wax up so I didn’t get the high sheen I was expecting. This is okay, however. The lowered gloss of the handle goes well with the sheath I made him. 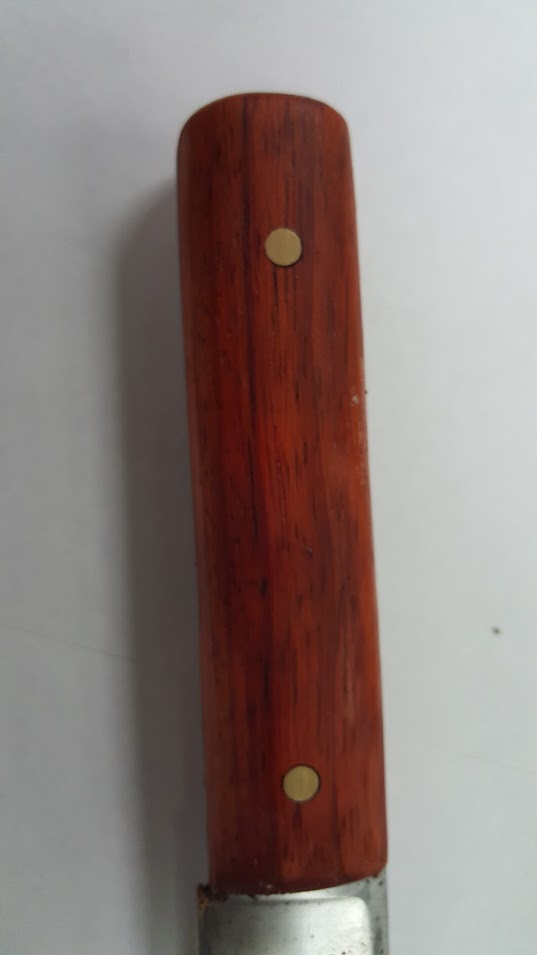 To compliment this knife I wanted a sheath that was completely different than what you would normally see. I started off by making a leather liner out of 8 oz leather. Due to my normal picture taking deficiencies, I have had to add this picture of another sheath I am making so you can see the gist of what I did. From the picture you can see that I just did a simple taco sheath without a welt. 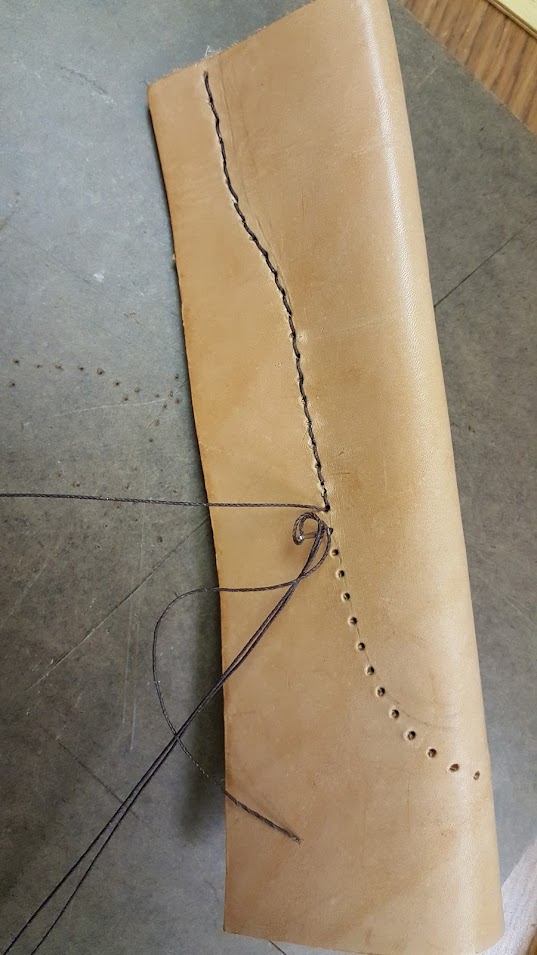 And then I wet formed the sheath into a Scandinavian style form. 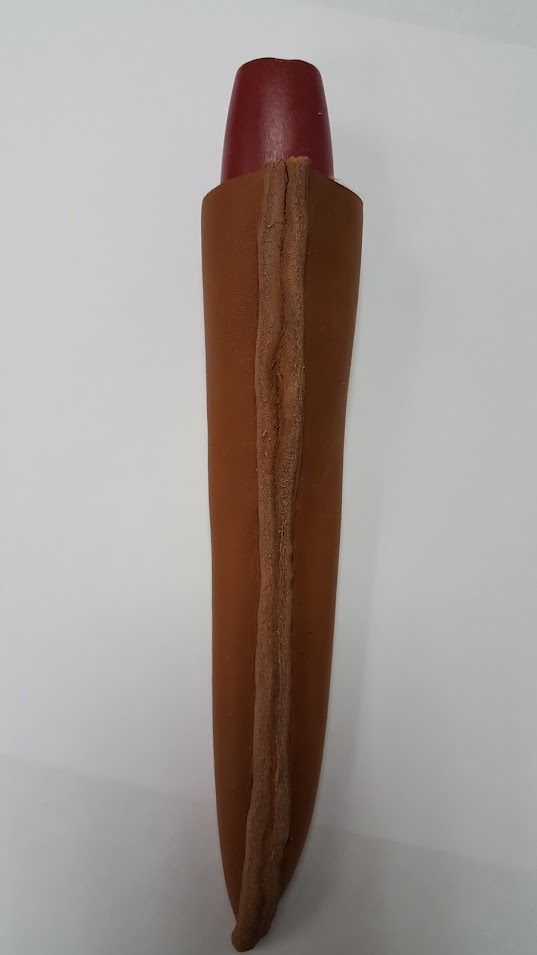 Once I got this wet formed I wrapped it in rawhide. The process involves a lot of soaking, stretching and is then sewn along the same lines as the liner. The rawhide was left overlapping the liner at the top so that I would be able to hit it with a heat gun and shrink it around the knife handle. In this picture you can see how I shrunk the rawhide to form it around the top of the leather liner. 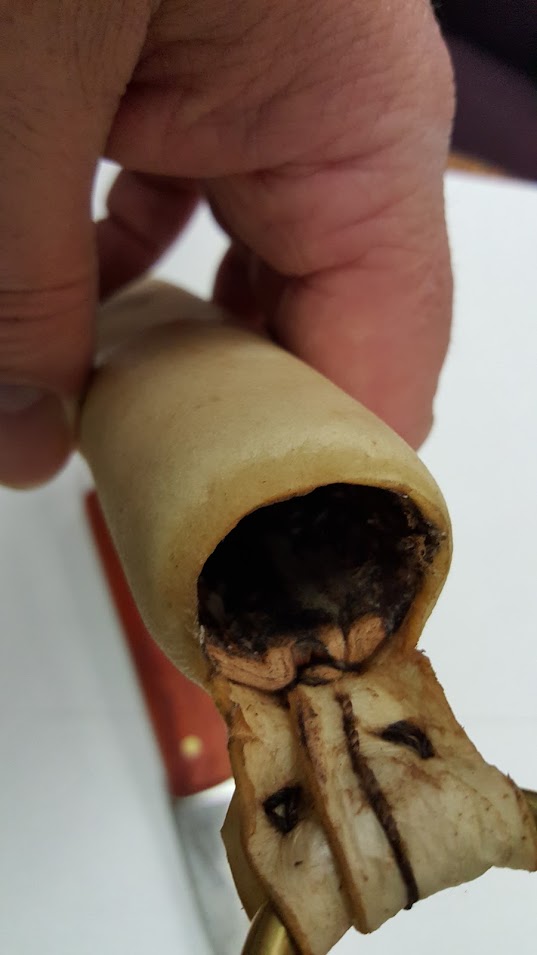 The back of the sheath, like I mentioned already, is sewn along that same line as the liner. As the rawhide dried it pulled around the lines of the blade. 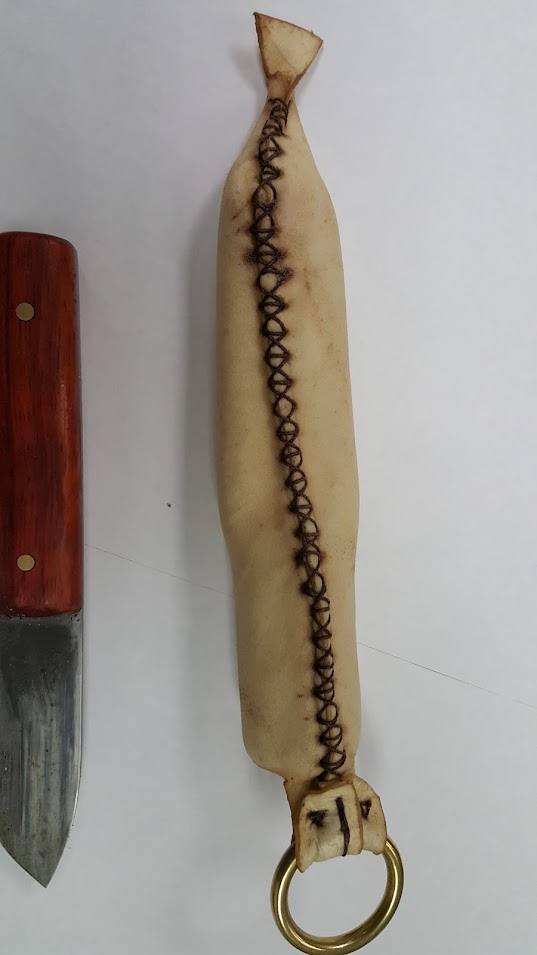 Back of finished sheath

I finished up the sheath with a leather lace that I whipped onto the ring. For adjustability I added the fisherman’s knot on the side. You can also see how tightly the top of the sheath fits against the knife handle in this picture as well. This will keep water from running down into the sheath and hopefully help protect everything. To keep the blade from rusting I squirted some oil into the sheath and waxed the inside of the liner. 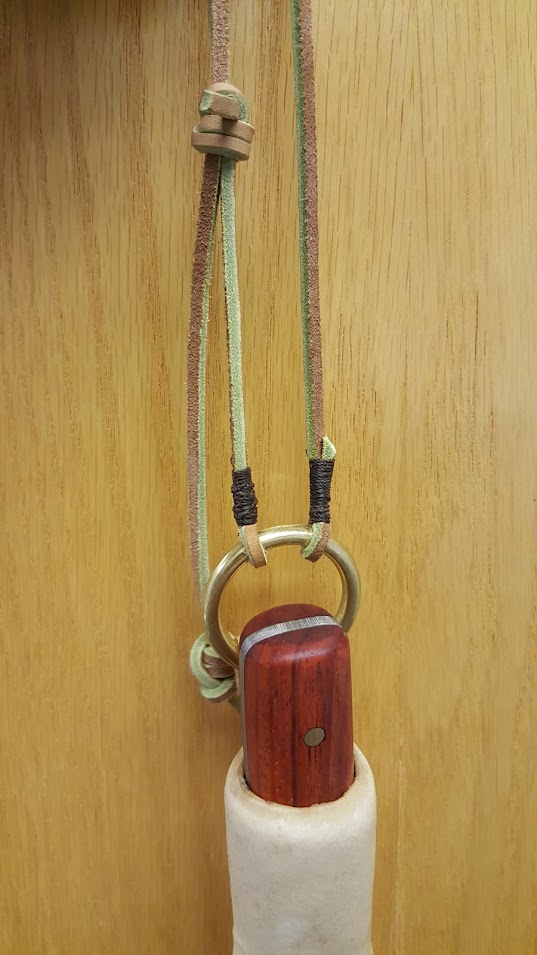 Hopefully my son in law likes his birthday gift. The sheath is still drying, but I hope to have it completely ready for use by the time I see him on Sunday. Lucky for me, he doesn’t read my site.