After having taught numerous Hunter’s Education classes, hunted around those new to the sport, and worked with countless people that are getting ready to start hunting at the range, I have found that there is a definite pattern. Those students that have taken tactical shooting classes and stick to those stances are at a definite disadvantage in the field. The tactical stances allow for great forward and lateral movement. In a hunting situation, however, most movement is based around a pivot foot. The tactical stances do not seem to allow for that pivoting movement and thus limit the field of fire and flight tracking needed to be effective while hunting.

As a way to better explain how I came to this conclusion, let me give you several examples.

Example 1: Several of us went out dove hunting. All of us “old school” stance users had no problem in getting our limits within only a few hours. A couple of LEO were also out there and were using their “tactical” stances. They had no problem hitting the birds that were flying in line with the way that they were facing. When a bird crossed their path, however, they could not effectively track it without having to physically pick up both feet and move. The stance just was not effective when it came to that swing movement needed in bird hunting.

Example 2: Skeet shooting at the range. A couple of prior military and current LEO persons were just stacking the slugs into a target one on top of another. They were obviously quite proficient and had practiced this a lot. When the range swapped over to skeet, they were both completely unable to track the clay. Their feet were moving around so much that we started giving them a hard time. We told them to, “Quit dancing and just shoot the clay.” Both were less than 5/25 and they admitted that they were never able to get into a good position fast enough to shoot skeet.

Example 3: Working with new hunters in the field. It never fails that when I work with new hunters that those in the tactical stances can not hit flying targets effectively. One such outing I saw this guy hitting everything set in front of him with slugs or buckshot. Not issues. Once we swapped to bird shot and tossed something, he missed almost every time. Even when I tried to help him and correct his stance, the way that the arms are positioned in a tactical stance really hindered his ability to transition over to hunting type situations.

So everyone can see the difference, here is the stance I am talking about. 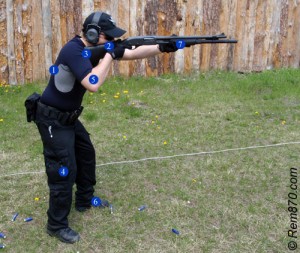 This stance is more squared off toward the target. Some people even square up completely with both shoulders completely perpendicular to the target. This disallows much twisting at the hips while keeping the firearm placed properly on the shoulder. It also does not allow for decent twisting motion because you weight has to be evenly distributed. You have to shift your weight, move a foot, and then redistribute your weight. Even the LEOs that I saw had to make that same movement to try and track objects flying across their path. This made their “swing” that is required for leading flying birds uneven and jerky.

A more traditional hunting stance is more like a boxer’s stance.

This stance allows the hunter to simply transition their weight to either foot and spin on the ball of their foot, thus smoothly tracking the animal during flight. Think of the movements that boxers make. Their movements are smooth, quick and they can easily track their opponent.

Now I know that not all people bird hunt or will bird hunt. The principle holds true with all types of game, however. The tactical stance disallows for decent twisting or sweeping type movements where game crosses your path. The hunter would have to twist more at the knees than waist for those wider, sweeping motions. Having witnessed it first hand on multiple occasions, it really is a difficult maneuver to properly sweep smoothly.

Here is your test: Pull out your trusty firearm and try it yourself. Get into one of the many tactical stances that are taught. Square your shoulders up so that your chest plate properly covers your vital organs in case you are hit. Then try and move in all the manners required while hunting. You will quickly agree with me that you suddenly become like a rook on a chess board. Great forward, backward and lateral movements, but you will have little sweeping movement. Next get into that boxer type stance that us “old school” hunters use. There is very little decent movement allowed except for sweeping motion. Forward and later is more of a crossover step or a shuffle. Not very effective for finding cover, but great for tracking game.

This leads me to my final conclusion: If you are a tactical type guy, have fun. Do your thing. If you do the tactical stuff for those SHTF type situations (prepper type stuff), you really need to include some hunting type education to be well rounded. Hunters in their “old school” stances are not going to be running up on something while firing. It would be more of a move, fire, and then move type situation to be effective. Either way, learn both and become effective with both ways to fire your weapons. You never know when you might have to adopt that goofy looking target stance to shoot a deer out at 700m while standing…..  Now there is one more to learn, so get out there and practice PEOPLE!!!!