Dispatches is the fourth book in the Perseid Collapse series of post apocalyptic books by Steven Konkoly. Dispatches is broken up into two parts, The Big Picture, which gives the reader an insight into world politics without the presence of the US ground troops. We get reports from the Russian invasion of Estonia and the ISIS recruitment of jihadists near Mosul. The first part is a terrifying read throughout and gives terrific insight into what the world would look like if the US retracted it’s armed forces to deal with a massive internal problem.

Part two of this novel, The Little Picture, deals with our friends in Maine. The Fletchers have relocated to Belgrade, Maine. Alex, the protagonist, is beginning to worry about the status of their food supply for their 19 member group. Meanwhile, the Governor of Maine refuses to recognize the Regional Recovery Zone and hostile actions intensify as a result of her decision. Her actions result in a military coup, lots of deaths, and a white knuckled ride in a SUV as Alex tries to return home to his family. During the whole ordeal his son, Ryan, steps up big-time and plays a more prominent role in this book. 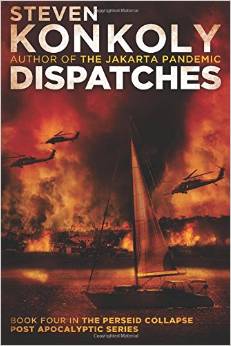