Point of Crisis is the third book in the Perseid Collapse series of post apocalyptic books by Steven Konkoly. Point of Crisis has a very different tone than the earlier books in the series. The Jakarta Pandemic and the first two books in this series are fantastic in that they mix an apocalyptic scenario with human drama and military style combat very well. This book seems to have dropped the human drama in favor of a military government take over of New England.

Point of Crisis is not about Alex Fletcher and his family. This book is about Captain Fletcher and his almost superhuman abilities as a Military Intelligence Officer working against an evil insurgent and blundering bureaucratic leaders. At times he’s an invincible character without flaws or weaknesses single handedly saving all of Maine from the forces of darkness.

This should had been another five star book following the super job the author did with the first two in this series. Point of Crisis is still a great action packed, intelligent, well-scripted story but this book took the story away from the focus on Alex’s family and their survival and more towards a criminal militia group and it’s leader Eli. Long chapters were devoted to cover the inner workings of this criminal militia leader which distracted from the focus of the two previous books. Overall it was a very well written solid book and I enjoyed it. I’m looking forward to Dispatches which is the last book in the Perseid Collapse series and is next up on my reading list. 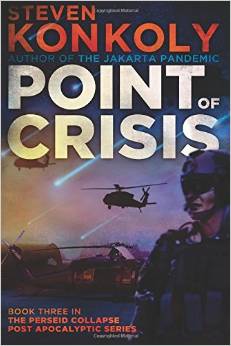 Point of Crisis Book Three in The Perseid Collapse Series