The Jakarta Pandemic by Steven Konkoly is a fantastic Post Apocalyptic novel and I would rate this as one of my favorites. A new strain of the H1 influenza virus starts spreading like wildfire across the globe with the death toll building at an alarming rate. Alex the contemporary upper-middle-class american protagonist, his wife Kate and their two young children live in a four-bedroom, two-and-a-half bath colonial-style home of recent vintage in a subdivision in southern Maine full of doctors and lawyers and business executives.

The story follows Alex: a pharmaceutical sales rep who loves his wife and kids and who is slightly disgusted with his job. So far, so normal. Alex, however, is also ex-military with some guns and lots of supplies in the basement and just enough salt to co-opt his employer’s flu vaccine samples for those in need when the pandemic hits Maine. We’ve all dreamed of the perfect exit from a demeaning job and Alex’s coup de grace does not disappoint. What follows is a fascinating account of the disintegration of a suburban neighborhood as a deadly influenza descends. Lack of food and water quickly become more threatening than the virus itself. The scenes of denial and desperation among Alex and Kate’s neighbors are particularly well done, and the build-up to the inevitable deadly show-down is intense and absorbing.

The author did his homework on both the influenza virus’s history and what it take to be prepared for long term emergency situations. While the Jakarta Pandemic can be deadly serious, it also can make you laugh with the banter between husband and wife and the ribbing between good friends. There are thrillers out there from more well known authors for three times this price and they don’t come close to the story telling here.

If you are not a prepper or for that matter even if you are, pay attention as you may learn a few things in this book that could help you make the best of an emergency situation. You cannot go wrong buying this book. I cannot wait to read the next installment of this story: The Perseid Collapse. 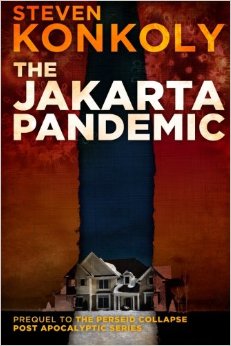 Gunguy talked me into reading one of Steven Konkoly’s books called The Jakarta Pandemic. It was actually quite good and got me started on his Perseid Collapse series. Until I got started on this genre from Gunguy, I was mostly a biography and nonfiction reader. This series really surprised me and I found it to be a great distraction from my normally boring selection of reading material. Although informative and educational, my reading selection immediately before Steven’s books was The Adams-Jefferson Letters. Honestly, the letters were not as entertaining.

Come to find out, Steven Konkoly actually has a blog that he runs. On this blog I found out that he opened up his storyline to other authors as a setting for additional stories to be written. I have yet to finish his original Perseid Collapse series (currently on the 4th book), but I must say that I am looking forward to what other authors have done.

On his blog there are also many resources and interviews that you may find interesting. He also has done several blog entries on such things as homesteading, survival, and even writing resources. It contains a broad spectrum of subject matter and his writing style is quite captivating.

Once I finish up with the Perseid Collapse and the associated writings based upon that world, I think I am going to start in on his Black Flagged series. It appears to be a thriller based upon a covert operatives and government conspiracy. It should be quite interesting.

Take some time and poke around his site. I think you will find at least something to catch your interest whether it be homesteading, survival, tactical operations, or just entertainment.