This is the second part of my AR painting experiment. If you did not see the first part, you can check it out here.

Painting and AR – Part 2 is about the actual painting process as well as what I learned while actually painting on the camo pattern. This was actually harder than I had anticipated or realized it would be.

As a stencil, I used these that I found on Amazon. They are designed for airbrushing and the pattern actually looked really good when painted. I did find a could things out regarding these stencils, however. When painting with them it is necessary to block off other parts of the stencil that you are not using. For instance, if you want the middle cutout you have to block off all the other cutouts on the stencil. This was a bit of a chore to deal with due to the paper “bib” I made to protect from over spray made the stencil a bit bulky. It also caused all sorts of build up of paint in and around the actual stencil. By the time I was done with each cutout I was almost scraping off the additional layers of paint so I didn’t smear or drip in unwanted areas.

I did realize quite quickly that the easiest way to fix you mess ups was to fit a portion of the stencil over the messed up area and just paint over the spot needing touch up. It is not necessary to actually match up the stencil to the exact shape you just painted. The new lines just add additional shape to the colored camo splotch. While painting, I found this to be an all out lifesaver when I messed up.

Here is a quick couple of pictures of both my progress and the layout of my painting area. 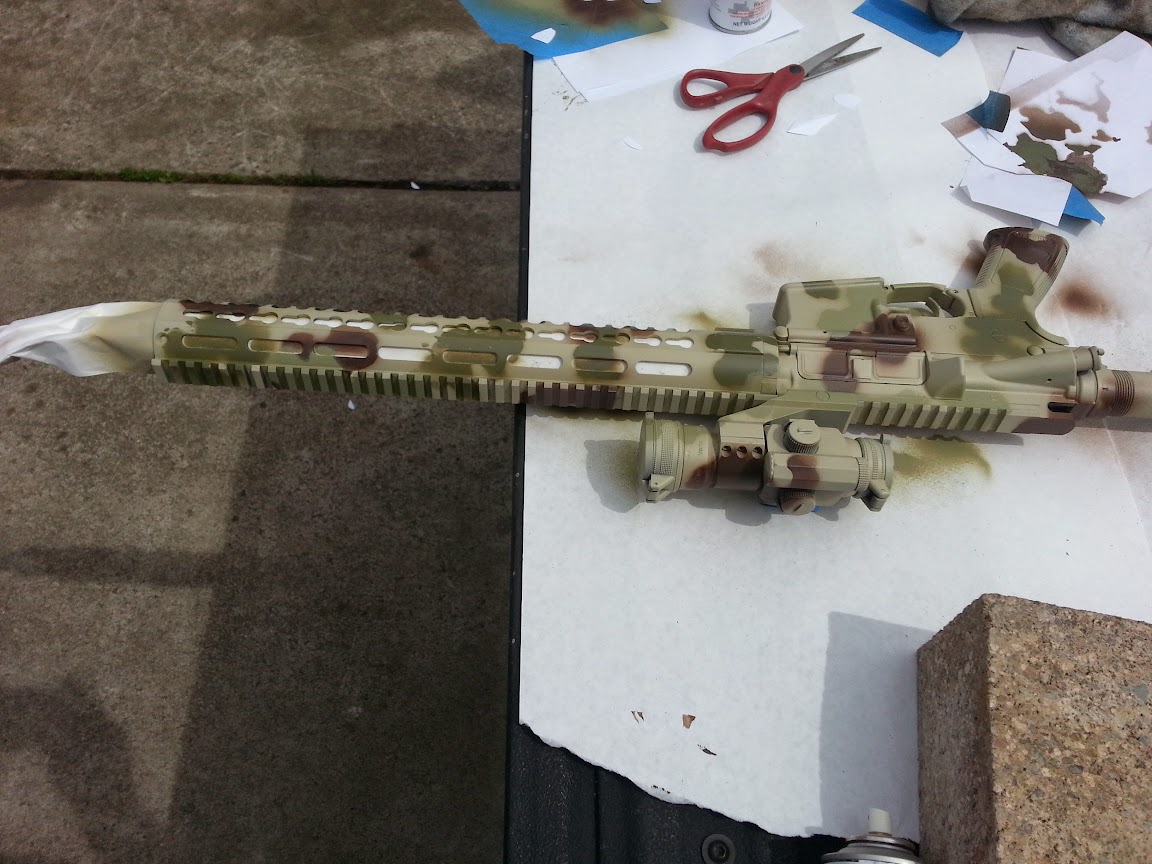 I painted on the back of my truck and used some butcher paper as the protector from over spray. At the top you can see a section of my stencil and how I covered up all the unused sections. The next picture will show a bit more. 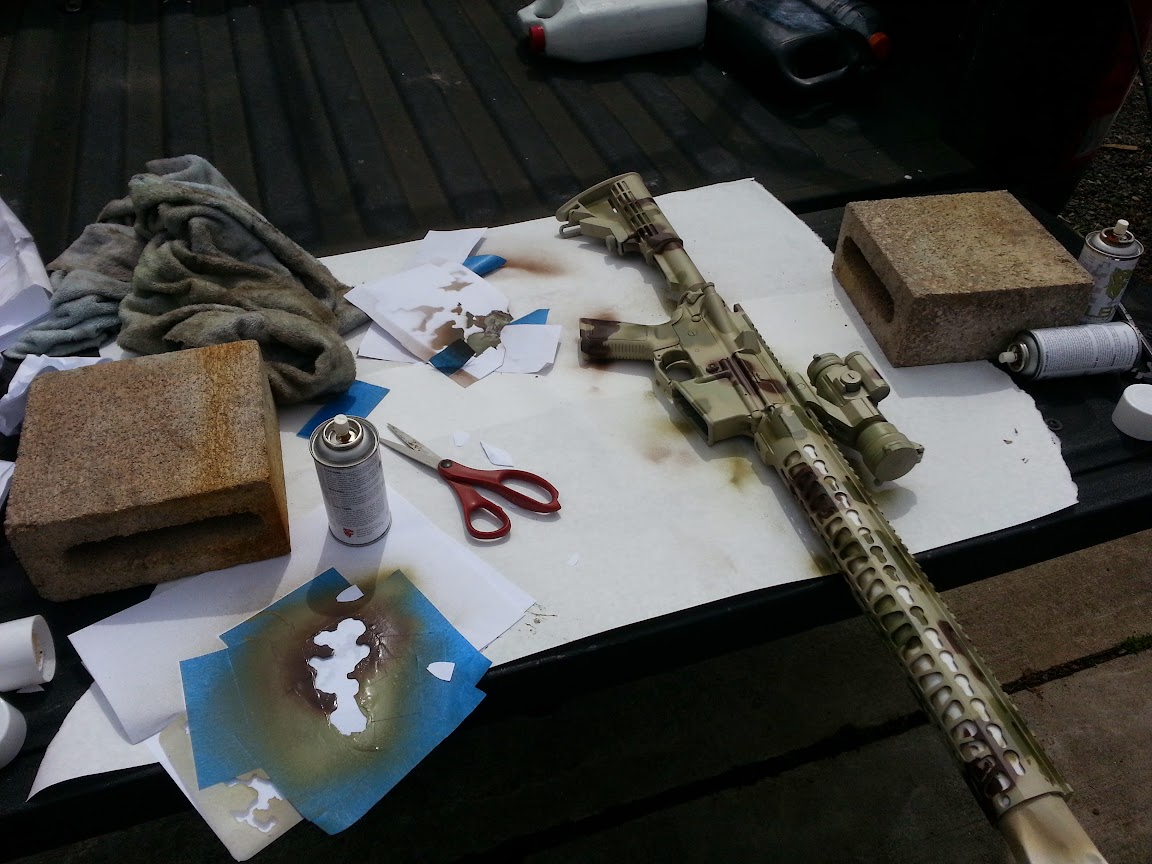 More of my working area

Notice how I used masking tape and printer paper to cover the unwanted stencil designs? This helped a lot because most of the extra paint came off with the tape. I only had to scrape a little off the edges when swapping stencil shapes.

As you can see I also covered up the rubber control section of my Vortex Strikefire 2. I did this so that I would not have a lot of paint chipping off the rubber or getting on everything after it dried. Paint on rubber just seems to take forever to dry. You can also see the paper that I inserted between the handguard and the barrel. This will give it a really nice look when done. 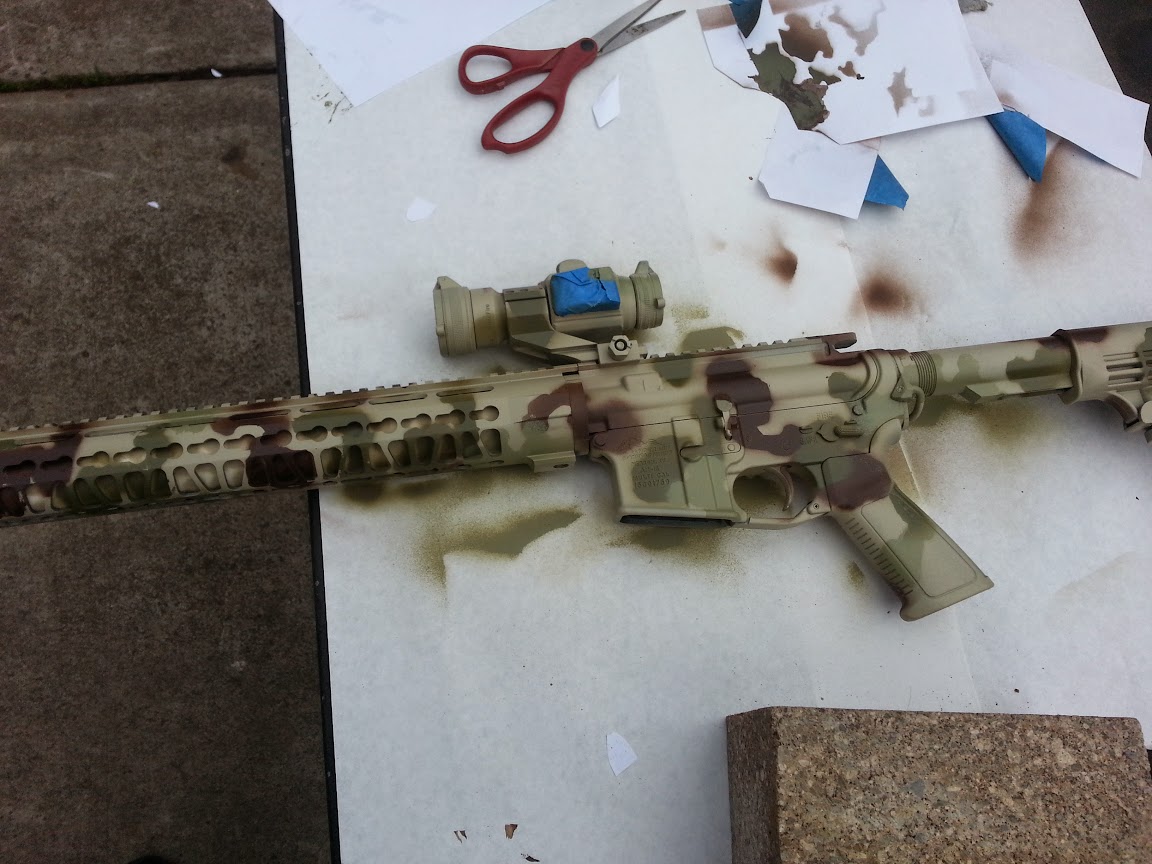 When painting, I found that I put the stencil as close to the rifle as possible and did short little bursts with the spray can. This did increase the potential for runs and curtains in the paint, but it drastically reduced the amount of over spray that I had to deal with. The lines were much tighter and more defined using this method. I also found that using the tan as the base coat really lightened the overall camo pattern. If I had used a light green and then painted the other splotches on, the overall affect would have been a much darker camo pattern. I think this will work quite well as a pattern to span most environments. If I need to add a little burlap to darken it as needed, this will give me the most range in environments.

Here is the final pattern from the right side of the rifle. I took this picture before I unmasked everything so that you can see the difference that the dark barrel makes with the pattern. I would also like to point out that I just painted over the dust cover (closed) to help keep a nice pattern. When the dust cover is open, there is a black hole that blends right in. We used to keep the dust cover closed while in the field to lessen the amount of cleaning we had to do, so this is how it will be most of the time that I carry it. 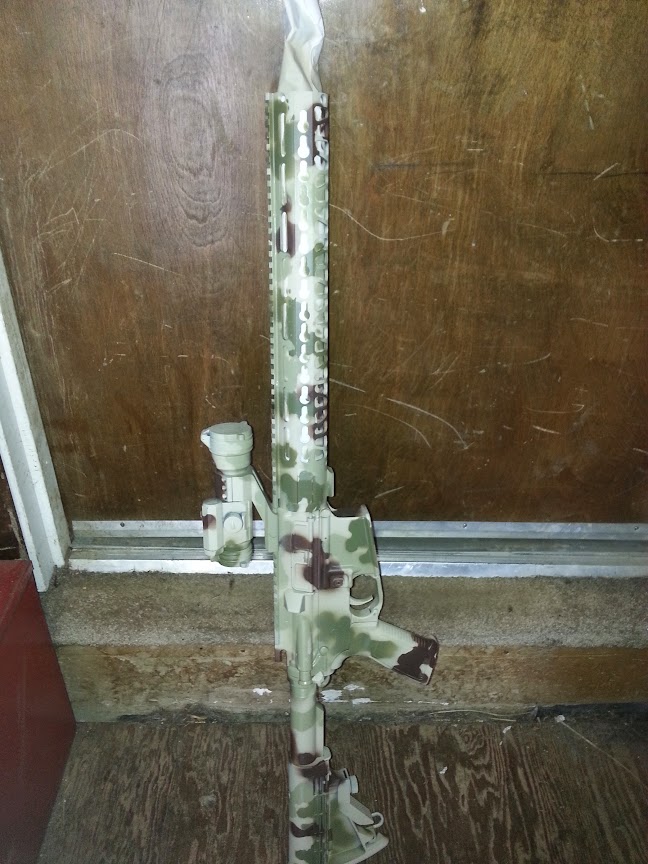 Barrel unmasked and pattern from front. The additional splotch on the front of the flip up cover helped a lot to break up the front of the rifle. Also, you can see how keeping the barrel black really helped with the camo pattern as well. It gives it a bit more depth. 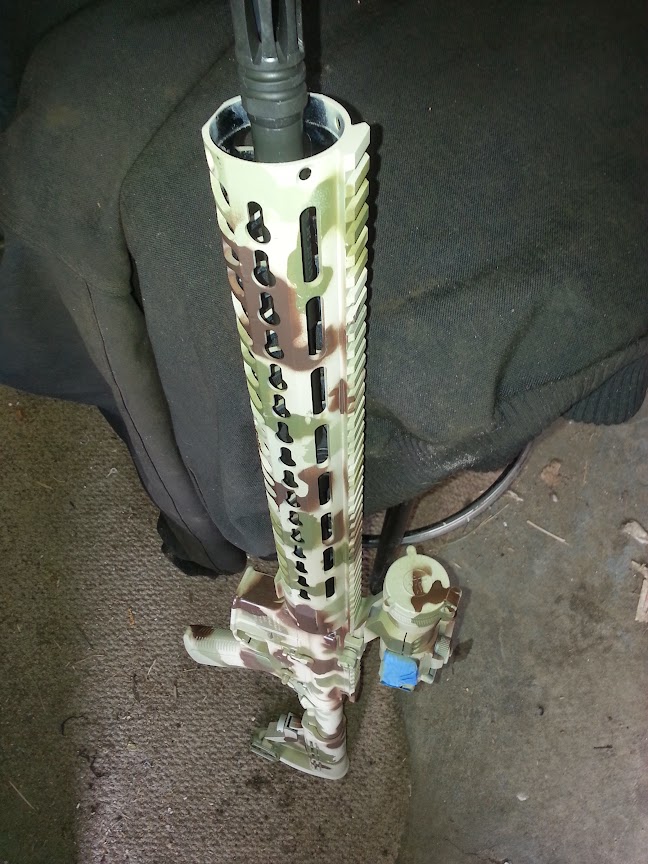 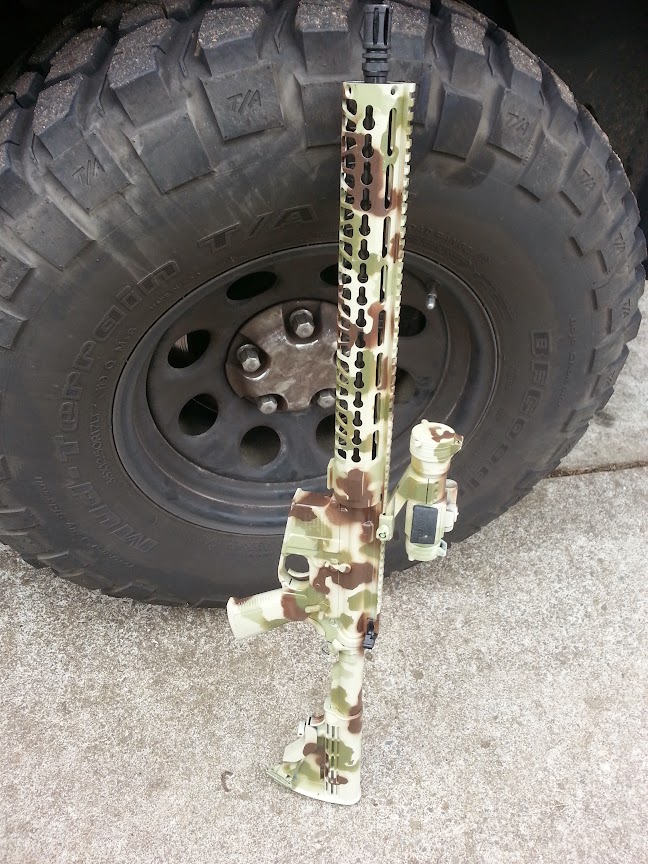 The final picture I have for you is where I just tossed in onto a shrub in my front yard. Although it sticks out a bit, I think it will span quite a few types of terrain. Adding some burlap will definitely help in more green and forested type areas, but this will definitely be better for drier areas than a dark green or black rifle. The black blob effect is very visible from a distance. 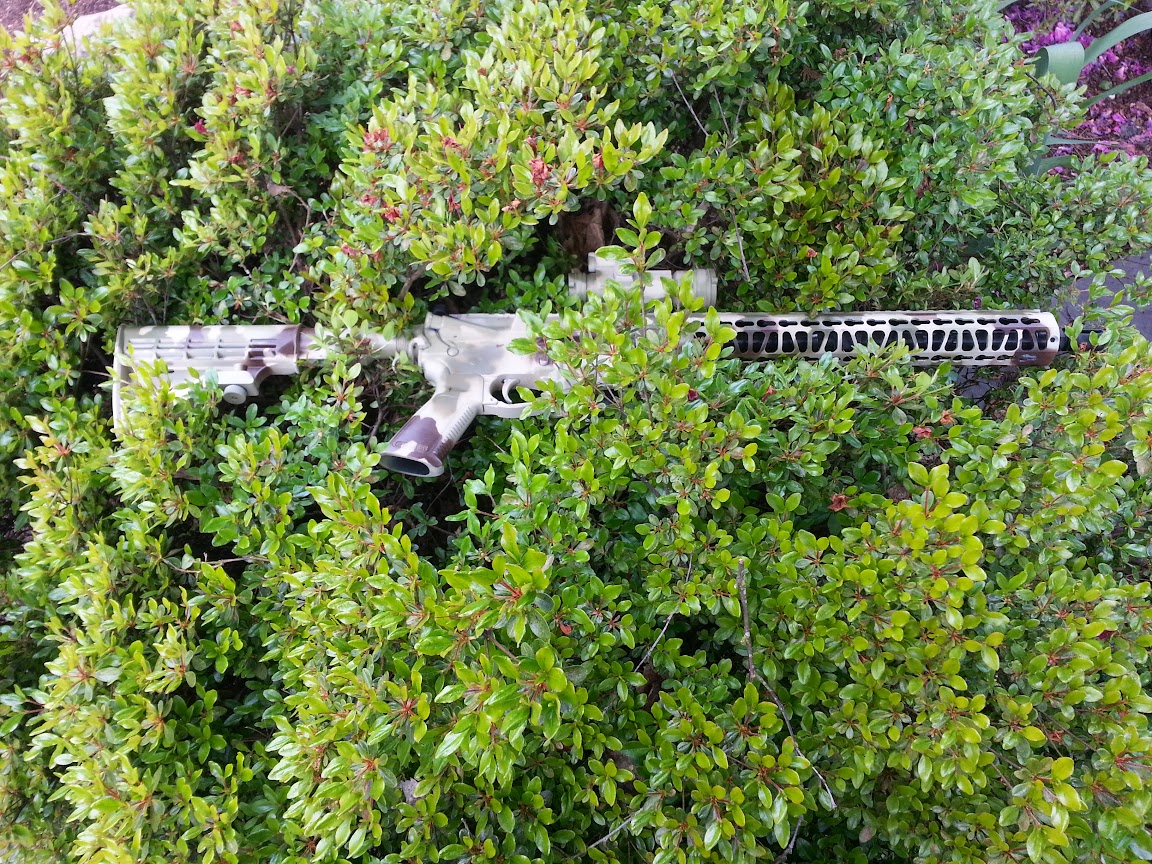 Tossed in a bush

I still have another AR to paint once the rest of my parts arrive. I will be doing it a bit different than this one just to see how the light green base works versus the tan base. It is also my SPR type rifle, so the larger silhouette will definitely need more middle of the road type base color to keep from either glowing or blobbing respectively.