Does The Campfire Reflector Wall Work? NO… Here’s Why

The campfire reflector wall is somewhat the mark of the experienced outdoorsman. But do they actually work they way they are purported, to redirect heat at the back of the fire to someone on the opposite side of the fire all snug in their lean-to? The short answer is NO! It doesn’t, however, stop others from continuously preaching it and can be found in many survival books. In all honesty, I too, many years ago, believed it. But why doesn’t it work? Well, first lets look at what we are discussing, so we are all on the same page.

A clear example of this is dropping a pebble into a still pond. The concentric rings near the point of impact will be more intense and as the rings radiate outwards they spread out and lose intensity. This happens with light, heat, magnetism, gravity, etc.

The same is true of heat. The closer you are to the campfire, the hotter it is. But as you back away, heat becomes less intense but covers a greater area at that new intensity.

Using the formula of Inverse Square Law, one will note that if we have a fire radiating at 100 degrees, when one moves back say two feet and square the distance one receives only a quarter or 25 degrees of the heat radiated by the fire

Look at the diagram below and position yourself at the position where the Yellow A is. Notice how the letter A has less red dots on it the further away from the source it is. That is Inverse Law. 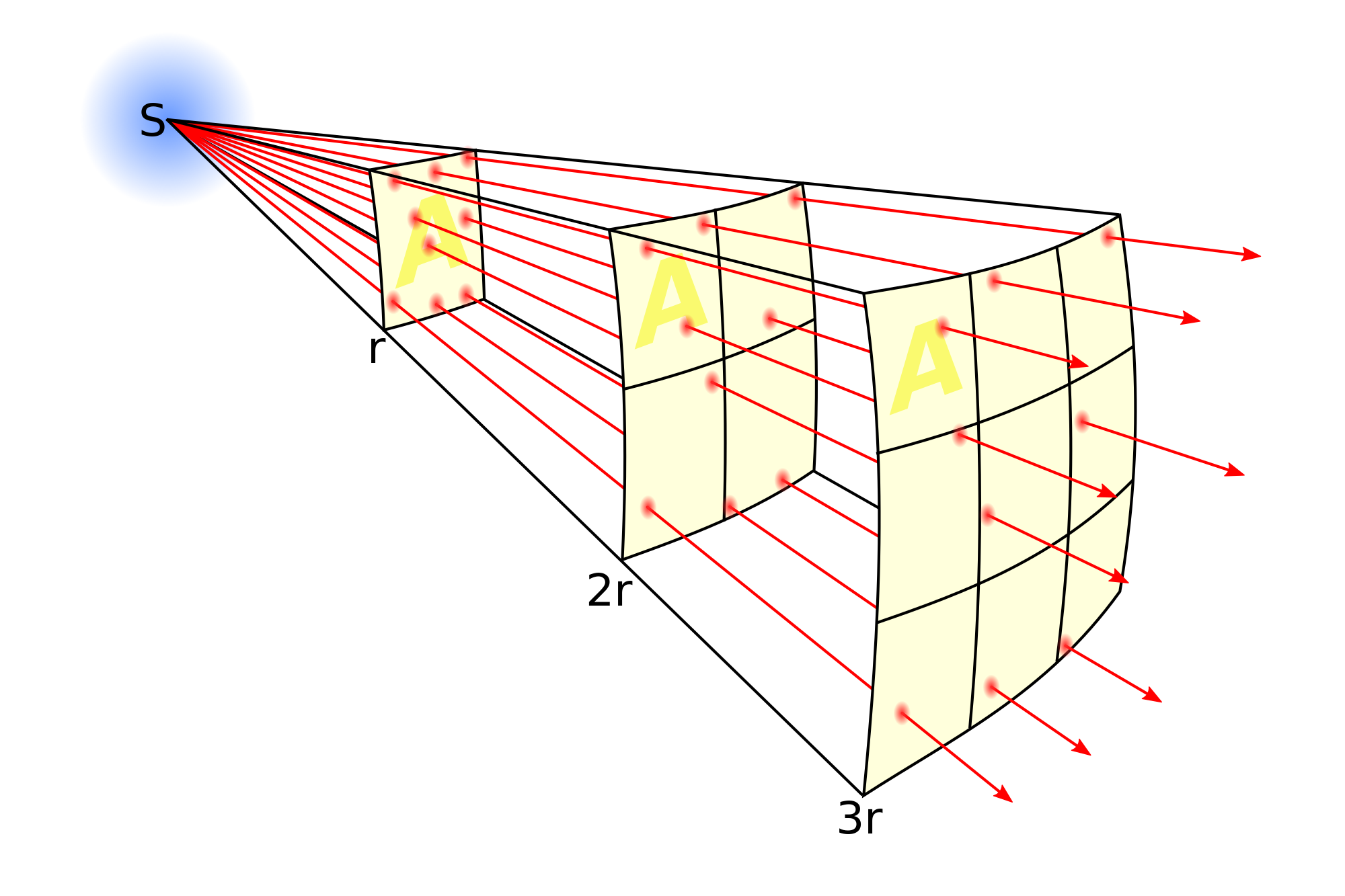 So how then does this affect the reflector wall? Well, imagine the radiated heat on the other side of the fire also falls off at the same rate, which it does. Now in order to reach you, the already lost heat has to jump back over the source, losing more heat in the process, and reach you at what ever distance you’re at, losing even more heat. The fact is by the time it reaches back just to the heat source it originated from, it is not even measurable, because the temperature is below what the source is radiating.

I know, your head is spinning, right? Here’s the experiment I performed at home, to illustrate the effect.

I took an indoor/outdoor thermometer and placed the outdoor probe 6” away from the back stove, between the stove and the back wall. I turned on the stove and watched the thermometer climb until it became stable and the temperature wouldn’t climb anymore. In my case that was 103 degrees Fahrenheit. I then took the wooden cutting board I had and placed it 2” away from the heat source, a la reflector wall, on the opposite side of the flame, nearest me. Now keep in mind the cutting board was way larger in relation to the temperature probe than anyone builds a reflector wall in relationship to themselves or the fire. The results were, that even though the cutting board was only two inches away from the heat source, the temperature at the probe did not climb past 103 degrees, even after leaving the board in place for about 10 minutes.

Now, keep in mind, this was about as a controlled experiment as one could have. I had a constant room temperature in the kitchen of 74 degrees, without fluctuation, and I had a gas stove putting out a constant 103 degrees at 6” away. In the outdoors, things will not be so kind to you as any little breeze will diminish results exponentially.

So, the long and short of it is The Reflector Fire Wall does NOT work. But if you’re going to go through the effort of building one at least use it to as part of a system to draft smoke away, because using it to reflect heat back to your lean-to won’t work.

As I always do, I like to analyse these type articles and put in my $.02. To begin, let us look at the science they used to determine that this does not work:

1) Inverse Square Law: They are correct about how the law works and they applied it correctly as long as you DO NOT TAKE WIND CURRENTS AND STRUCTURES into effect. The fact that a campfire’s heating dissipates so quickly is based also upon the cooling nature of wind currents and surrounding structures. A campfire out in the open will actually have much more of its heat dissipated and you will receive less heating effect because of this. To illustrate this, let us think about a wood burning stove or fireplace. As slow moving air around the fire is heated it will rise, thus creating a current. These warm/cool air currents will slowly heat the room due to the ambient air temperature rising and the air ends up being rewarmed. The heat will also warm the surround structures, thus also helping to increase the ambient air temperature. Quite simply, if you were only judging the filling of an apple pie instead of the whole dessert most people would consider it WAY too sweet.

2) Ever heard of “getting out of the wind” or “wind chill?” These effects were never even discussed because this would have disproved their misguided theory. By adding more protection to your shelter, whether there is a fire or not, you decrease that effect. Because most people are not going to go out the woods and build an entire log cabin for a short stay in the woods, good shelters and a reflector wall become a great alternative. When this wall is created and a fire is properly placed between that wall and your structure, you have in essence created a “fireplace” of sorts for you shelter. This protective wall blocks the wind, cuts down on the air currents that will carry your warmed air away and your structure is able to collect enough of the warmed air to actually start to warm up itself. This is just like the concept of a fireplace or wood burning stove. Warm the air, collect it, reheat it, warm the surrounding structures, and thus the camper will be happy…..

3) Lastly, I want to add a bit of common sense to this. Why is it that your tent will heat up the longer you are in it? Is there any major insulation to that sil-cloth dome tent you bought? That fabric is VERY thin and lightweight. How about that rain fly made from the same material? There is no insulation there. Where is the insulation and how does the tent stay warmer than the outside environment? The air trapped between the fly and the tent itself acts as a layer of insulation. This works just like goose down, prima loft or any other number of materials. The trapped air works as an insulation barrier to keep you warm and act as insulation. This same principle is at work when you build a good, solid and large campfire reflector wall in front of your shelter. Although the sides are open, the wall works as a way to partially wall off your shelter and allow you to use trapped air for insulation. Heat that air and you are good to go…..  This is a no brainer…..

To wrap this up, I am quite concerned at the stupidity being spewed by so many “outdoors” sites that are trying to cash in on the survivor hype that reality TV has created. These morons are going to get someone killed if they don’t slow down and apply some traditional knowledge to situations rather than picking out a single aspect to rip apart techniques that have been used for 1000’s of years. Even though ancient people had never heard of Inverse Square Law, they seem to have been better suited and more capable of applying Common Sense Law to their daily activities. If you want to quit doing what has worked since the Stone Age then go for it. Have fun in your RV while you watch Netflix and your DVD of Jeremiah Johnson. I will keep doing what works, makes sense, and doesn’t require some keyboard commando to validate it.