Several years ago I purchased a Solo 428 Backpack Sprayer. Seeing as how it was Solo brand and thus a fairly reputable company, I was under the impression that my $100 sprayer would be able to be repaired for years to come. Last night I pulled it out to use it and found that this theory was going to be put to the test, for the pump was broken.

I drove around and called several dealers of Solo sprayer products. No one seemed to have the parts for this sprayer and the unit was discontinued. Being a little miffed, but understanding that I could probably just contact the manufacturer I went ahead and bought a new Stihl with hopes of repairing the old Solo as my “loaner” sprayer.

When I called the Solo company I was told, “We don’t carry that sprayer and it was made by Plasindo. You would have to call them.” Solo outsourced this sprayer, put their name on it and now dismisses customers when they ask for help getting parts? When I asked the “customer” service representative to confirm that I had inadvertently purchased a $100 disposable sprayer and they don’t support this product with their name on it I was told, “You can deal with Indonesia, but I don’t know if the hassle will be worth getting the part. Just buy a new one.”

Seriously, this lady’s recommendation was to just “buy a new one” because they don’t support products that they outsourced from Indonesia. My question is: WHY DID YOU PUT YOUR COMPANY’S NAME ON IT THEN? Why would I have bought an overpriced sprayer from Solo if they were going to be so dismissive? I understand things being discontinued and no more parts being available for a product due to age. If that was the answer then I would have cursed a bit and just dealt with it. When the answer comes out that I overpaid for a disposable unit because they don’t support it, go deal with Indonesia…..  Come on Solo.

Here is a picture I downloaded from the Internet of the sprayer. The piece that is broken is the copper tube portion of the pump. 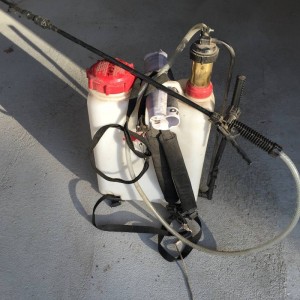 I am now hoping that I can fix the cracks myself with my welder and get it back up and running. The cost of this unit was definitely not worth it since it can’t be repaired.

Chalk this up on the board as a lesson learned. I will never buy a Solo product again and have gotten to the point where I only tend to buy Stihl products. They can be repaired and hold up 10x better than their crappy Indonesia competitors.