Well, I have had this sitting in my gun safe for a couple weeks while I compiled my money for some sort of sight and got time to go try it out. Last night I made a flying run home after work, loaded up the family and we made a trip to the hills to go play with the KSG and my .357. My son also brought his new 12 gauge H&R single shot (which is an absolute riot to shoot as well).

Here is how my KSG looks now: 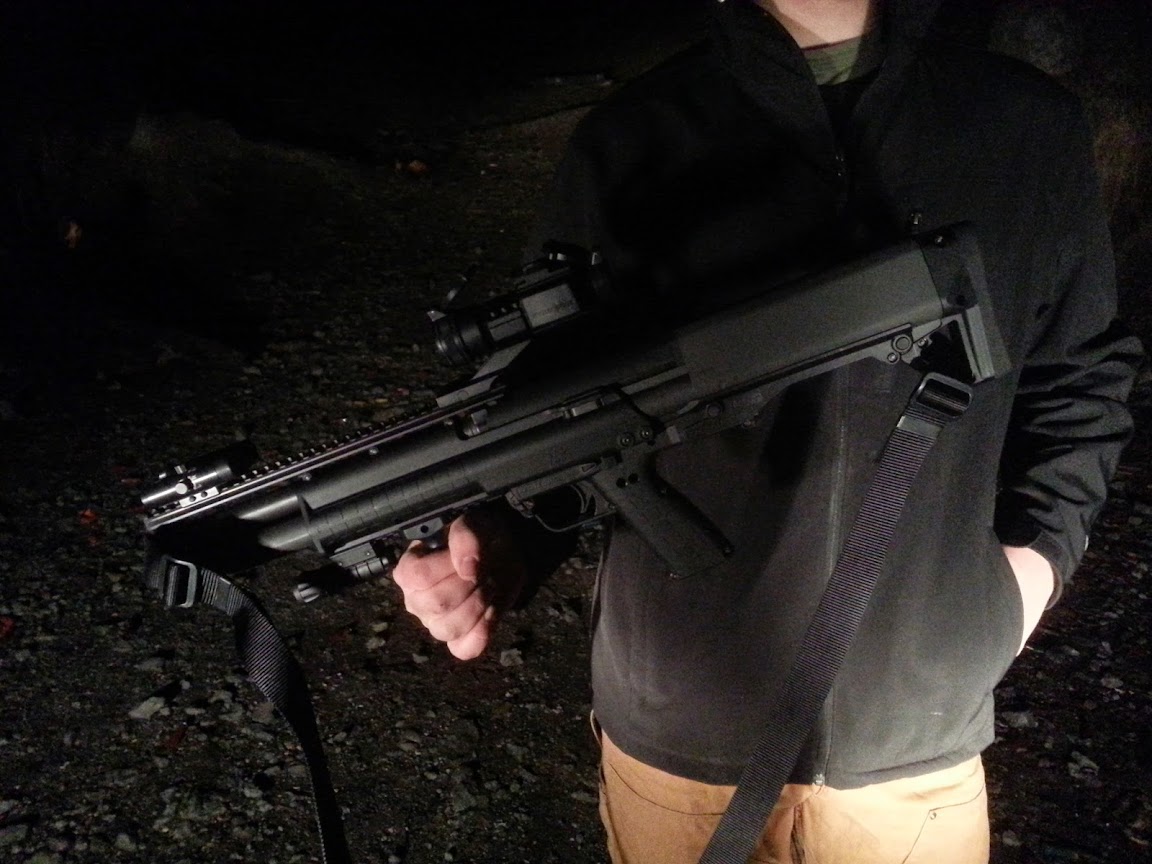 It has the following accessories:
1) Knight’s Armament verticle foregrip
2) LaserLyte Center Mass Green Laser
3) Vortx Strikefire II Red/Green Dot
4) Some light I got at a gun show – I broke somehow last night and am looking for a replacement

For those of you who complain about recoil:
Seriously? It is a 12 gauge. It’s recoil is less than my double barrel Stevens. It is even less than my son’s single shot H&R 12 gauge. If you think the recoil is bad on this then I suggest a .22, airsoft or some specialty built semi-auto that has recoil reduction accessories installed. We put 9 boxes of shells through it last night and 4 I burned through by myself. My son burned through 3 and my wife burned through 2. Again, I say that anyone with recoil complaints should rethink their own capabilities and quite blaming the firearm.

For those that think it jams:
Learn to actually use a pump shotgun. Quit short stroking it. We used up 9 boxes in the KSG alone and NEVER HAD A JAM. It worked flawlessly and was silky smooth.

For those that dislike the ergonomics from pictures:
It actually snaps up to give you a perfect sight picture quite instinctively. Since it is so short and easy to maneuver I never had a problem with snap shooting it and getting the butt caught on my bulky clothing (it was 30 degrees in the hills where we were shooting). The optic ends up right in front of your eye and it just ends up resting perfectly against your shoulder. Very nice fit and feel.

For those that think it is too hard to reload:
Sure, detachable magazines are quite common in many firearms. I don’t know if it would matter that much in a true SHTF situation. Having been prior military, I don’t see myself using this for much more than CQB/MOUT type situations anyway, so 15 rounds is much better than the 8 the shotguns they gave us held. It took a bit of time to reload with gloves on, but after I got the hang of it I was able to quickly fill it back up. I was definitely no speed shooter like the competition guys, but the quick target acquisition and smooth firing of this weapon makes up for a lot of the “issues with having to reload 2 magazines.” It really wasn’t that bad.

No SIGHT? ARRGGGG!!!!!
Uh…. Ok. Many AR’s require you to buy sights. Just because the gun shop tosses some MAGPULs on before you buy it doesn’t mean that it came from the factory that way. Ever buy a hunting rifle? No iron sights and not even a set of mounts are included with most I have ever seen……

$1000?!?!?!?! Seriously?
Well, a MSRP for a 870 Express Malpul FDE is $900 and I have rails already installed. A Mossberg 890 Magpul series is MSRP around $775 and has no rails installed. I guess you could take a wood funiture old Winchester Model 12 from a pawn shop and buy some accessories for it to make it “tacticool,” but the KSG is current and uses current technology in its production, comes with enough rails to hang about anything, and you can even install a choke tube adapter for around $100 with tool cost to run WinChokes at $15 per…… Even if I bought every possible upgrade for this weapon system I am out a total of $200 for the stainless followers, choke tube adapter and the tools to install both. Heck, I didn’t even have to buy a sling because it came with one…….

For those considering a tactical shotgun:
You can get cheaper shotguns that you can hang ever bell and whistle on that you would ever care to attach. You can see what I have on mine and it still weighs less fully loaded than most people’s “tacticool” 590′s and 870′s….. I didn’t even have to buy new rails, fore end, or anything because it already had rails on it.

All in all, I am completely amazed and in love with this firearm. It is very short and compact, is butter smooth, and works flawlessly. I am almost embarrassed to admit, but I was so excited to take this out last night I forgot to even clean it up. It was “tested” right out of the box with only the factory oil and protective crap they do to it. When I cleaned it up afterwards it was even more smooth and fluid. Any complaints about this shotgun seem far fetched to me after having fired it last light. Maybe either user error or jealousy? I don’t know, but the KSG is awesome…..