I came across EMP Los Angeles purely by accident on Amazon. I read the Kindle version last year and I was impressed with its gritty authenticity. The book follows three groups; a policeman trying to get home, his wife and child trying to survive at home, and those police officers left at his station house. It uses a typical 1-2-3, 1-2-3 style throughout, and it is very exciting. Initially I thought the book would benefit from editing but I gave Frank LaFlamme some leeway as it is his first book. Luckliy for those who haven’t read it the second edition is out and most of my complaints have been addressed.

The author Frank LaFlamme is a retired LA Sheriff’s Deputy, and unlike other authors he is writing about things with which he has personal experience. He may not have experienced the collapse of the LA power system, but many years of working in rough areas of LA have given him insight into the realities of street life and many individual incidents are based on incidents he or his colleagues experienced.

I’m a big fan of Post Apocalyptic fiction. The genre has expanded in recent years due to fears of the economy collapsing, global pandemics and National Geographics Doomsday Preppers. I read the books and watch the movies for entertainment value and I find the tough situations that the writers put their characters in very interesting. Most books are from a preppers perspective or someone who has gotten lucky. There are no books out there from a Law Enforcement Officers perspective during a shit hits the fan situation. That’s why I found EMP Los Angeles so interesting and exciting to read. I recommend it highly. 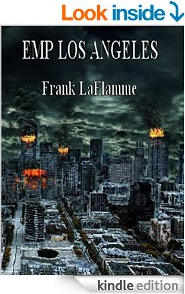