I reside on the squishy side of Washington. We get an obscene amount of rain here. This creates many problems (or challenges if you took any “leadership” courses). Because of the constant rain and wet environment, rust on your high carbon blades is a real issue.

What can you do? Should you put wax on your blade before you go out? How about using a polishing wheel to get rid of the surface rust? Patina works, right? Should I just use blades that have a thick coating on them like enamel or paint? Maybe I should transition to only using ceramic and flint knapped blades?

Well……  Here is my solution.

After searching high and low for a way to keep my pistols and knives from rusting, I just started going old school. In some readings I learned that many people (throughout history) used some sort of oil skin or oil rag to keep their metal items in to protect them. This got me to thinking……

Where do my knives and pistols live life more often than not? Their sheaths and holsters of course! What if I was to oil the inside of the sheath or holster?

“BAH! That would ruin the sheath or holster! You are crazy and that won’t work!” many people told me.

Well, I am here to say that it does work and it works really well. I keep my pistols in well oiled Cordura type holsters when not in use and I use well oiled leather holsters when I am out in the woods. The oil seeps into the leather and continues to protect, displace water, and prevent rusting. It also keeps the leather from molding or rotting due to prolonged exposure.

Here are a few pictures of my well oiled leather:

This sheath was custom built, but was heavily waxed and was causing some rust to build up on my blade. Here it is after I oiled the inside. No more rust! 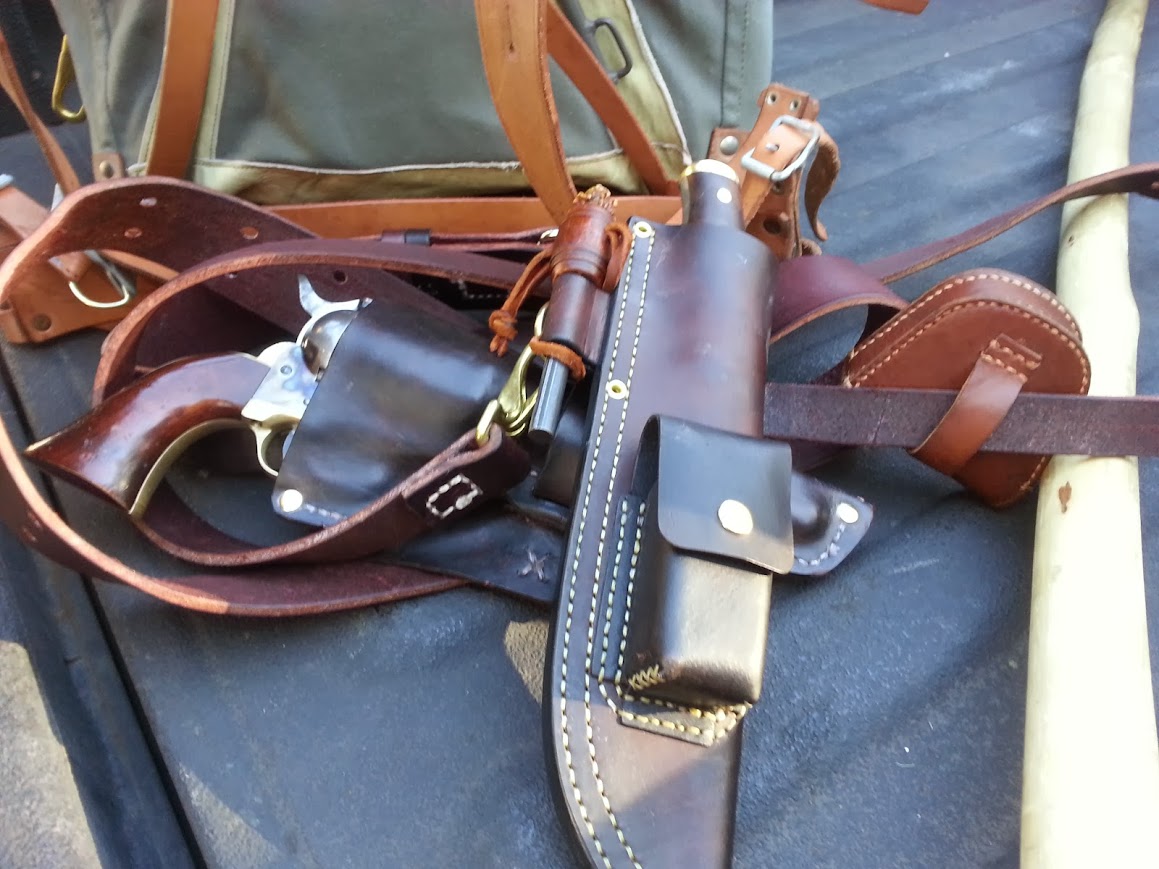 I made this sheath. I first tried waxing it and using Sno-Seal. Blade went right to rust spots just because of the humidity. I then sprayed the inside down with oil and all is now grand. 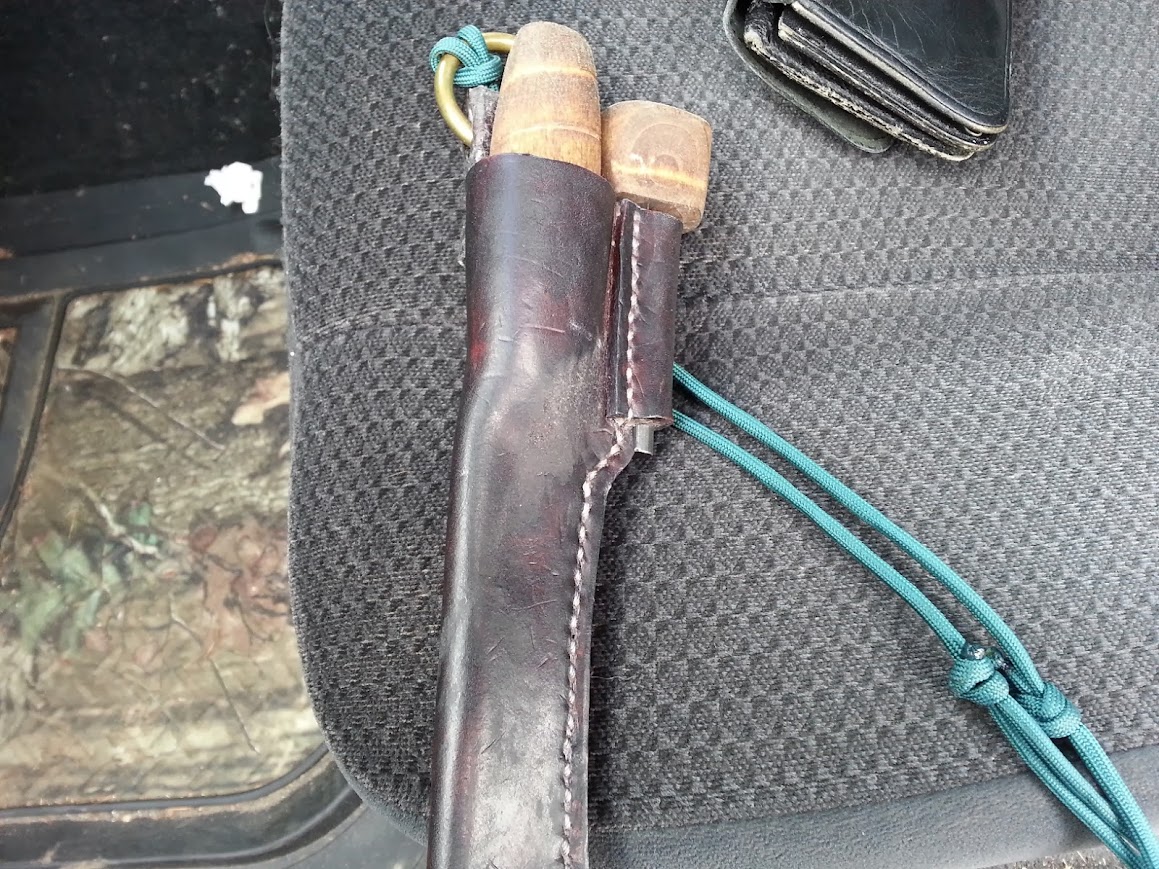 Necker with Mora and homemade firesteel

I also made these (except for the Condor – but the sheath is well oiled). After dying them, I oiled the crap out of the inside. No rust.

Now this one I did a little different. All I did was oil it and put Sno-Seal on it. First the Sno-Seal with heat to melt it in. Then I soaked it in oil. Came out looking really good and it doesn’t rust the blade. I have done several just like this and can post a picture of the pattern upon request. I still have one leather blank all cut out that I use for a pattern. 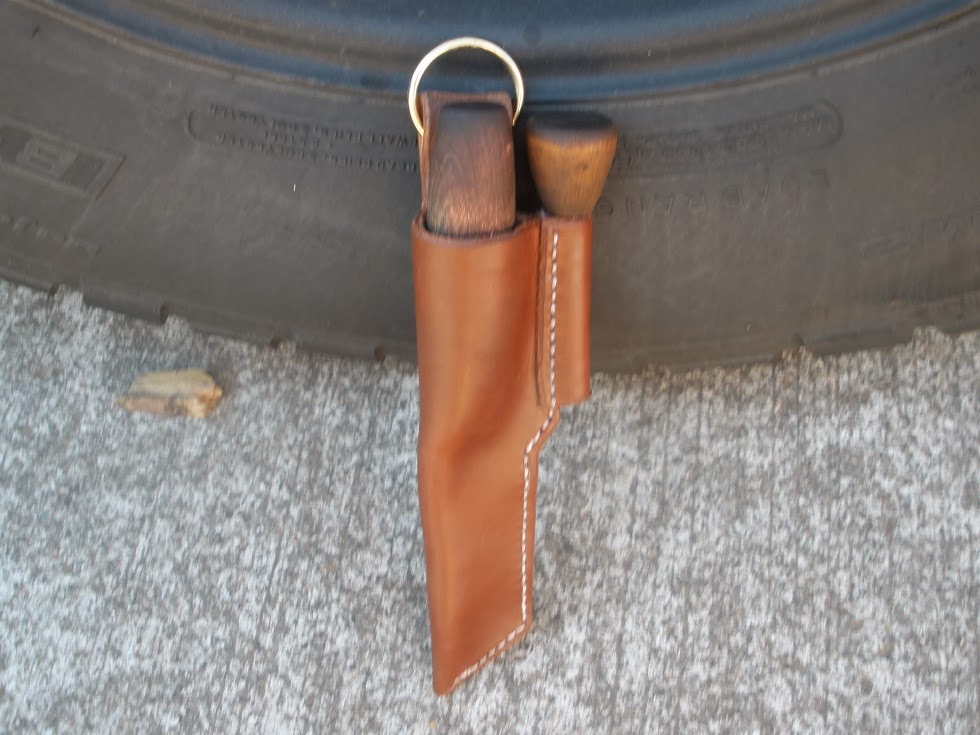 Another necker and homemade firesteel

I don’t have a picture of it right now, but I also got an Adventure Sworn knife and sheath that I had to oil. After just a couple hours of being out in the Washington weather, I was getting rust spots on the blade. Once I oiled the sheath and the blade, it all went away and have not had any issues since.

Now you may ask, “What sort of oil do you use?” Well, I have tried several types to include, WD40, RemOil, Barricade, and CRC. None work nearly as well as Liquid Wrench.

I don’t know what they put in it or how it works so well, but it is the product of choice to spray inside your leather products for rust prevention. Now, it does make your leather products smell and I have yet to get a good solution for that other than some drops of vanilla. That means you might have to weight the benefits versus smell if you bow hunt. I have used vanilla (Mexican vanilla you get from the little bakeries down south) on a piece of cloth and then wipe the inside of the well oiled leather down. It cuts the smell tremendously. My son and I were 12 yards away from the deer he took and it didn’t know we were there, so it helps obviously. If you are strict about your scent control, you might want to only use the oil method for camping equipment. Just giving fair warning.

Since I first started using oil to coat the inside of my sheaths and holsters, I have yet to get any rust on anything. Every time I try and do something different, I fight the rust game. You can use my trick or not, but it does work.

Thank you for looking and let me know if you have any other, well used and practiced methods of fighting rust in places as squishy as Western Washington!