How long are people going to argue about the viability of using a knife for fire preparation? It makes NO sense to me why this is still an argument……..

Let me being with the back story before my rant:
I was down in Texas for the better part of last week. My plane landed a little after 1800 (6 pm) and I got home around 1900 (7 pm). The son, the daughter and the daughter’s boyfriend were outside. A fire in our fire pit was in the works. Like usual, my son was out there with his Primitive Edge bushcraft knife batoning and feathersticking away. Some jerk had stopped to give him hell about using his knife in such a “disrespectful” manner. This guy then felt the need to start in on me about how ill taught my son was and how I should have put him in the Boy Scouts so that expert outdoorsmen such as himself could have taught my son correctly……….

Again, I ask why people argue about the use of knives in fire preparation. When you go online and do a search for using a knife to baton wood, you will get tons of results where anyone that batons is called names. These same people will quickly turn around and use the same knife they won’t baton with for making a feather or fuzz stick, however. This makes no sense. If you can use one knife for cutting and stripping wood, why can’t you use it to make smaller strips of wood by batoning? Better yet is when they pound the wood onto the ground or a rock with the knife being used as a splitting maul. When the wood splits, they quite effectively slam their knife into the rock. Again-again, I wonder why that is a fine use of a knife when careful batoning is not.

For those of you who do not know what batoning is, please let me explain. Instead of using an axe to split wood, a knife is used and another piece of wood is used to hammer the far end of the knife so that the blade travels down the length to split it. This is most commonly used in split wood fires to make very small pieces of wood for kindling. Once the small pieces are done, you use the same knife to make feather/fuzz sticks.

Many of these self proclaimed “experts” in outdoors “survival” have a tendency to use military survival training as the basis for everything that they know about living in the bush. They will buy those mylar emergency blankets and expect that to keep them warm if a situation crops up where they get stranded. They will also carry some Rambo knife that is not even full tang and think that this fighting knife is a survival knife. What really needs to happen is that they need to understand that “survival” and “bushcraft” are two completely different things. If you can thrive in the woods, you don’t need to “survive” in the woods. You can carry less and be comfortable for the wild will provide.

Maybe they need to research this guy: 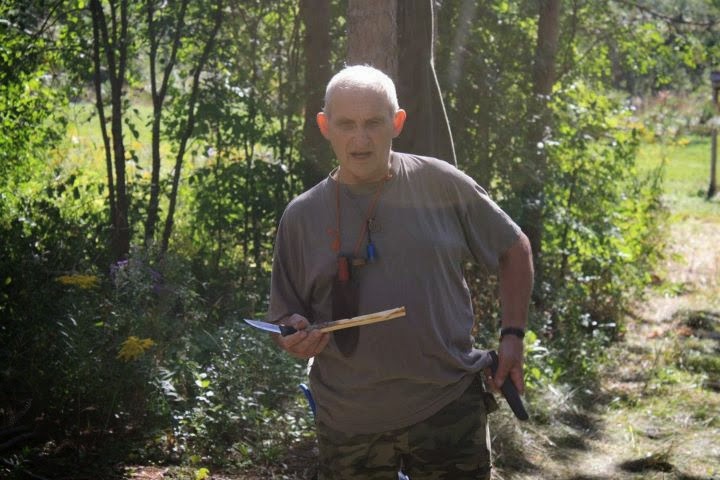 The picture is of Mors Kochanski. If you don’t know who that is and are spouting off about batoning a knife, you have serious issues……..

Here are some links to an interview with Mors.

As you can see from the interview, he is considered the modern “Grandfather of Bushcraft.”

Why do I mention him? He teaches and preaches the importance of being able to baton with your knife. It is one of the many lessons that he harps on as a basic skill for outdoorsmen.

If you are not as well versed in bushcraft and believe people like Dave Canterbury more, even he batons his knife.

If you don’t believe them, then how about this?

The reality is quite simple. People use tools to complete tasks. A good bushcraft knife is simply a tool. Just make up your mind as to which tool you like best. Whether you use a knife, hatchet, machete, cleaver, axe, or any other tool you choose, the final result is really the only true way to evaluate the effectiveness or value of the tool. In the case of a skilled woodsman using any of the previously mentioned tools, they are all effective.